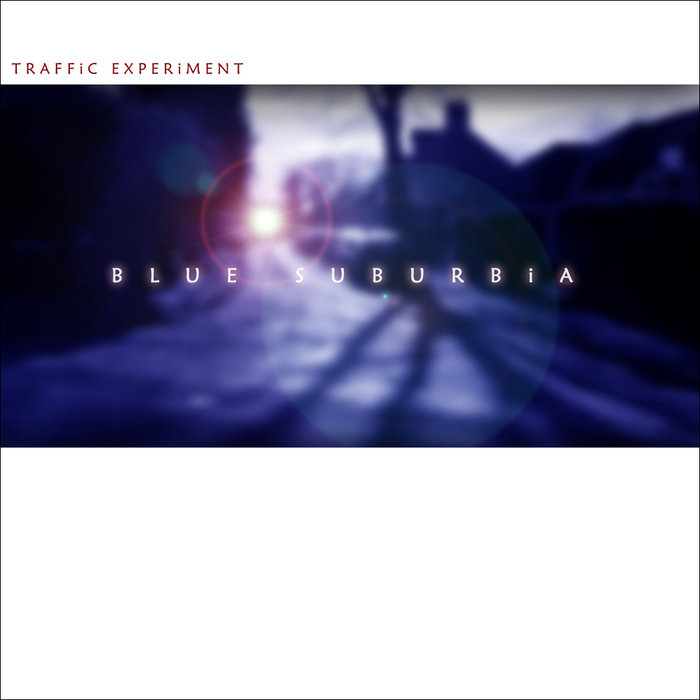 Michael Stevens I like this very much. The musicianship is high quality and the male vocalist has an excellent voice. Highly recommended.

Nate Wilson The intro with the simple acoustic guitar and haunting background tone lead me right into the fitting lyrics. The change in tempo around the midpoint of the song was very refreshing. Favorite track: Ghosts & Shadows.

David Davis I love this band and this album. After a bad day at work, I'll come home and pour a glass of wine and just get lost in this album. Excellent music. Spacey, dreamy, etherical and just some killer music to listen and get into. Buy this! Favorite track: The Astronomer.

Recorded at Woodworm Studios, Oxfordshire and at home between July 2006 and Feb 2009.

Mixed by Steve Hill and Stuart Chalmers at Woodworm Studios.

Traffic Experiment are a progressive art rock band from the UK. They released their debut album Blue Suburbia in 2010. In 2011 the band released a reworking of the classic Doctor Who theme. A live Blu-ray (Traffic Experiment - Live [at the End of the World]) was released in 2013, with that difficult second album currently in production.. ... more

Track Name: Heavy Braking
The signal comes in a flash of green
And sets the rats upon their way
Wheel-to-wheel and nose-to-tail
So, will I play?
Metallic roars and Pirelli screams
A motion-blur in dust and flame
Forget the rules, don't give an inch
It's just a game

The Sun will come up and the race will begin
There's nowhere to run with the walls closing in
Escape is the dream but it preys on my mind that it's too late
Track Name: Once More (with feeling)
The new cog in your machine has already started to rust
The decay of our childhood dreams, stagnated and gathering dust
Each minute that drags itself by is another minute's money in the bank
Each minute that drags itself by is another minute that I'll never get back
The future had seemed so bright before
Now day after day you want me to do this once more (with feeling)

The years seem to stretch behind and I still haven't come all that far
I need freedom to motivate more than promotion and a company car
When I'm stuck in an endless queue, through traffic experiments, past diversion signs
While beneath my mind's paperwork lie forgotten melodies and unfinished lines
And life seems to drain from every pore
And day after day you want me to do this once more (with feeling)

I thought independence would help set me free
Now I'm living my dreams through the things on TV
While the feelings I had for this world around me have been numbed
And so I can't do this once more
Track Name: The Astronomer
The stars rise high above the bay
And filter down through ocean spray
A path that wanders up and down
Past the dunes and sleeping town
Across the silver frosted field
Where the blackened firs shield
And there beneath a darkened dome
The astronomer watches all alone

Before the first rays cross the bay
Before Orion fades away
Before the sand dunes turn to gold
And fairways into emerald
On a path that travels down
Past the burn and waking town
A man is slowly heading home
The astronomer's work tonight is done
Track Name: Vacuum
I was drifting through the vacuum of these days
Hoping salvation would come my way
Thought I might find it in the comfort of your bed
And your touch would clear my stormy head

Because lately I've forgotten how to feel
Now temptation burns with desire that's so real
But your fidelity holds my tongue, never to reveal

I was searching through the fragments of today
In case your words gave you away
If I could see into the corners of your mind
Would it be me that I would find?

But my demons were a piss-poor excuse
And I tried to change but was no use
And now with his diamonds and his child you've forged the blade to cut me loose
Track Name: Sirens
Now cast away and lost at sea
Upon the waves of uncertainty
With shipwrecked heart and shipwrecked mind
Temptation sailing close behind
I lock myself up to the mast
Deny the solitude of the past
But when the mist come rolling in
I hear the Sirens start to sing

But could there be someone
To lead me from oblivion?
I lie awake beneath the stars
Just trying to work out who we are
Now that I can't see the shore
I can't feel things any more
And so I won't release the locks
And end up lying on the rocks
I won't end up broken on the rocks

And could you be someone
To save me from oblivion
Light my way beneath the stars
Take me home and heal the scars?
If I can't see the shore
I can't feel things any more
So help me cast away the locks
And lead me safely across the rocks
Don't leave me broken on the rocks
Track Name: Ghosts & Shadows
All the dark and the light
All the warmth and the spite
Our words haunt this room tonight and keep me awake

All the night and the day
All the work and the play
Time heals all or so they say but what do they know?

Apart and entwined
Forever, in our minds
Now all that is left behind are ghosts and shadows
Track Name: The Weight of the World
The time that is forever on my hands
Seems to quickly pass me by
A thousand thoughts are set upon collision course
Fragment and echo through my mind
The distant voices barely penetrate these walls
Just whispers in a dream
Outside, a painted smile, a mask of sanity
These things are never what they seem

And when it comes, sleep's a wonderous thing
So precious and so rare
But sleep is no escape from my anxiety
For dreams are always there
And in my dreams I climb the broken steps
Of a staircase to the sky
And every night I'm stranded halfway up
While you all pass on by

Take a look far beyond these eyes
And you may see me there
Between the Earth and sky, reality and dream
A place of hope and of despair
And if you know the secret that unlocks the door
Release me from this cell
And lead me down the narrow, winding paths
That I once knew so well
Track Name: Enlightenment
I've been wandering around in my mind
Searching for things that I'd hoped not to find
Belief in One who has hurt and controlled
Question this truth as it's always been told

I asked but it was not given to me
I sought, found nothing that I could see
I knocked, when nobody answered the door
I begged until I couldn't take any more

In here, fear and love once lived
And now I've nothing left to give
Track Name: Home & Dry
The tortured tales of such despair
The Sirens' songs that lead them there
The locks, the chains, the wooden mast
Are remnants of a lonely past
You have saved a wayward soul
And with a song above them all
Unbind this tangled web we weave
With a smile that helps me to believe
Track Name: Lucky Stars
Taurus child who wanted it all
Asked too much and cried for his soul
There became something deep inside of me
A sadness that cut a path so wide

When all the dice are rolled and all the cards are seen
There is always you and me
Luck is what we make and destiny will fail
This world is ours to rule until our starlight pales
Track Name: The Crimson Sky at 5AM
Now these streets lie empty and still, warmed in the early light
The clear morning air breathes life into day
All of the world is lost deep in dream, oblivious to the night
That left me awake here where I lay